The Hardman family of Birmingham were strongly Catholic.  had been a friend of Augustus Welby Pugin who designed many items of ecclesiastical metalwork and stained glass produced by Hardman, including some at St Chad’s Cathedral, Birmingham. Augustus’s son, Edward Welby Pugin, worked closely with his brother-in-law, John Hardman’s nephew, John Hardman Powell

Photographs Courtesy of Steve Walker © 2020
​
Apse Windows
(click on the images to enlarge)
Made by Hardman in 1862, the images shown in the three Apse centre windows are St Mary, the Queen of Heaven with Jesus, flanked by Moses and the burning bush to the right, and St John to the left.
​West Window
(click on the image to see enlarged individuals) 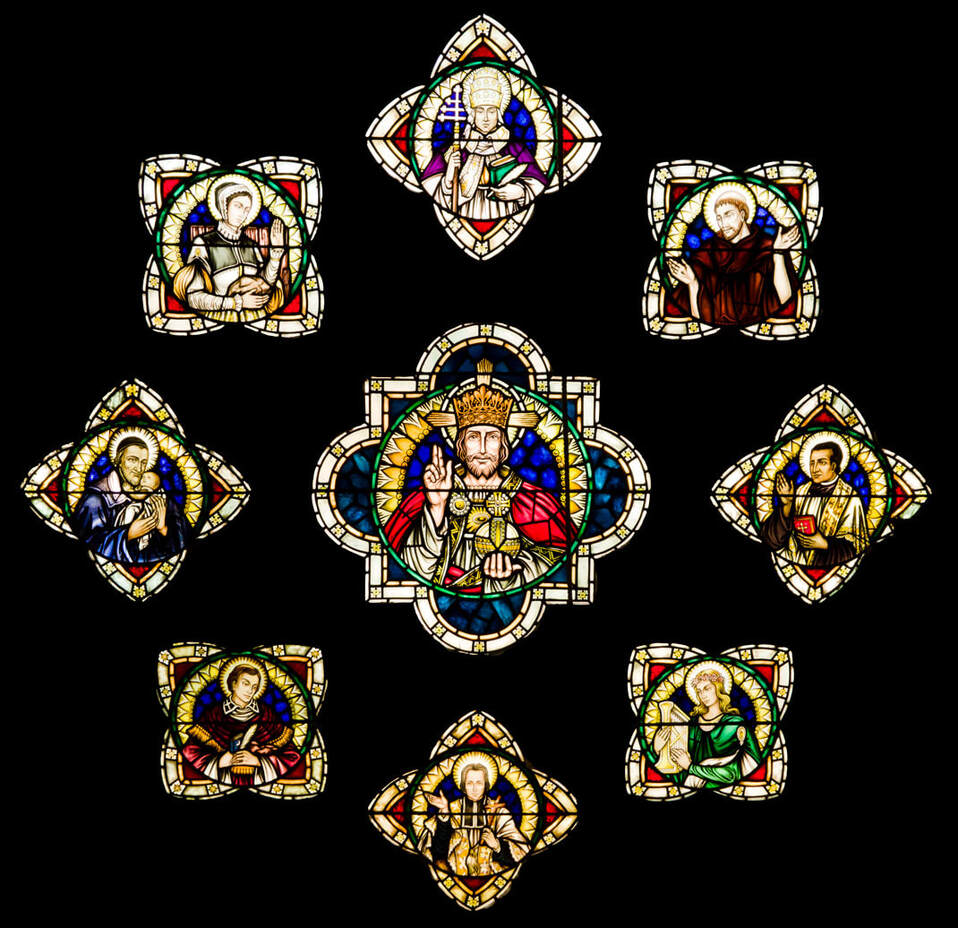 © Steve Walker 2020
The west window, above the gallery, was designed and produced by John Hardman Studios in 1973. A large round window depicting Christ the King is surrounded by eight small windows depicting saints.

Clockwise from the top the saints are St Gregory, St Francis, St John Bosco, St Cecilia, St Jean-Marie Vianney, St Stephen [identified thus in Hardman’s preparatory sketch but the image has the appearance of a priestly saint and not the usual version of Stephen the martyr who was stoned – perhaps this might be St Francis de Sales?], St Vincent de Paul, and St Margaret Clitherow.

It is thought that the various organizations in the parish each paid for their patron: it is likely to have been Fr Burns, a keen musician, or the choir sponsored St Cecilia; Youth Group (St John Bosco); St Stephen (altar servers’ Guild of St Stephen).  However it is believed that the St Vincent de Paul Society did not start in the parish until the 1970s. Margaret Clitherow was one of the Forty Martyrs, who were on track to being canonised in the 1960s. Jean Vianney was the Cure D'Ars and his influence was quite prevalent among Catholics in the 1960s.